After 2 Years we can announce that a brand new 11 track album will soon be released on Ten Foot Records. The full digital release will happen on Saturday 25th June and there will be a launch gig for the CD version at The Fulford Arms in York on 23rd June.

The first single (and video) to be released from the album will be I.C.U which will be known to those that have seen us live in 2021. At least half of the tracks on the new album are brand new unheard tracks and there are even some guest collaborations.

Check back here for more updates or follow us on our social media channels.

An excellent reception for our gig at the Victoria Vaults in York on 1st October, and thanks to Mike Hood Photography for capturing the action. It was a great warm up for our support slot to the mighty CUD at the Crescent on 28th October – get your tickets early as it is likely to sell out.

With the hope that the pandemic will be a thing of the past we are starting to book new shows for 2021. It will be brilliant to announce straight away that we will be the main support to 90’s indie legends CUD when their tour pulls into York. If you can’t wait til then we have a headline booked in York for 30th July at the Victoria Vaults. This may be the first time that you will hear some of the excellent new songs we have been writing for you.

All year we have been promoting the album “Seaside Donkeys” on vinyl only but from 23rd December you can get it on all your favourite digital platforms like Apple Music, Spotify or Tidal. So, from all of us at Percy: Happy Christmas, enjoy the songs and listen out for a brand new album in 2021.  https://music.apple.com/gb/album/seaside-donkeys/1546131173 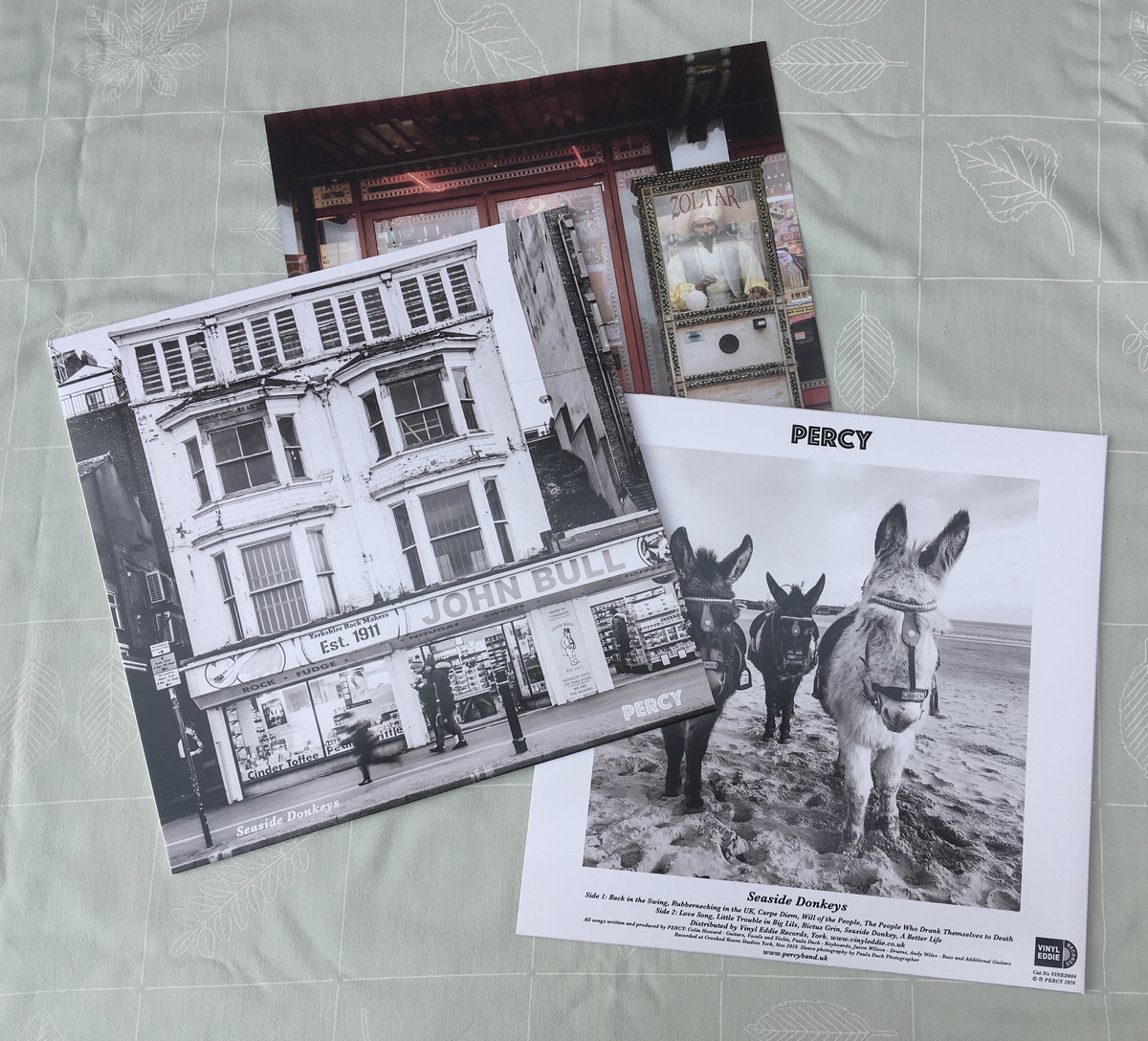 At last: “Donny Rednecks” 1999 single added to the online back catalogue

It’s been 21 Years since our Mook Records release “Donny Rednecks” was getting played on Radio 1 and until today there has never been a digital version available to listen to and buy. Click below for details. https://tenfootrecords.bandcamp.com/…/donny-rednecks-s…
This release is what STEVE LAMACQ at the time called “A toe tapping jaw dropper: Life in a northern town on viciously beaten guitars. Think Half Man Half Biscuit meets the Housemartins…”

Very pleased to get some long awaited airplay from Tom Robinson on his BBC 6 Music Radio Saturday night show July 11th. He had some very kind words for us and put that in a tweet. Thanks again

Click on the link below for a great new review of the full Seaside Donkeys album. The Guzzler says  “Percy have evolved into a full on force to be reckoned with. A previous 2018 release “Sleepers Wake” was the first to showcase the present lineup and saw them regain an edge not heard since 20 years previously; “Seaside Donkeys” builds upon this whilst also introducing a keener sense of melody and arrangement, alongside moments of clangourous new-wave guitar and piercing dissonance…”

‘Will of the People’ Video goes live

Friday 1st May saw the video for ‘Will of the People’ go live with views in the 100s in the first 24hrs. Very well received by all the video is nicely summed up by www.madmackrel.org “Here is an excellent animated video for left-field post-punk band Percy’s frenzied, vitriolic governmental anti-anthem Will Of The People. The track comes from their new album Seaside Donkeys, which drops on 8th May. The album is an in-your-face scream that represents the gritty realism of the 2020s and the slow, inexorable decay of the UK…” The video is all the work of Ash at http://www.hotfroganimations.com/ the likenesses to the band members is remarkable.

Music News.com 4/5 review “One hell of an Album”

Fantastic review of the Album in Music News.com from Andy Snipper “As one who lived through the original Punk wars I can recognize a lot of the different bands that made that such a vibrant time in Percy’s music and they carry it off with class whether it is in Johnny Rotten’s sneer, Howard Devoto’s otherworldliness or Rat Scabies thumping drumbeats – there are even elements of Frank Zappa and Capt Beefheart in there! They write real songs with memorable melodies and, most important, lyrics that matter….” we’ll have that thank you very much . https://www.music-news.com/review/UK/14227/Read

First full album review, and its a cracker

Full album review just in from Bill at With just a hint of  Mayhem : “Percy are most definitely back with a bang. ‘Sleeper’s Wake’ was good but ‘Seaside Donkey’ is a whole new level. Punk, post-punk, US Garage, UK pub rock is all rolled into those menacing, satirical, maniacal, dark and twisted tales of life that Percy fans have come to know and love! If you miss out on this album then you really are a seaside donkey!”